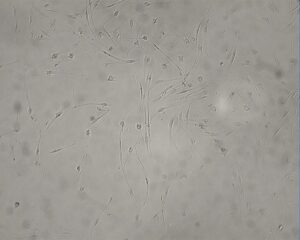 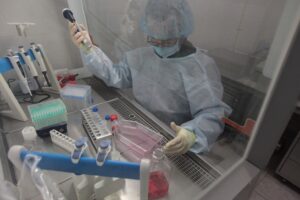 Our laboratory is organized as part of the D.F. Chebotarev State Institute of Gerontology NAMS of Ukraine. The institute has been dealing with the problems of aging for more than 60 years. After the organization of the cell culture laboratory, it became possible to study the aging process at the cellular level. This is what our research group has been doing for about six years.

The phenomenon of cellular aging was discovered and studied by Leonard Hayflick many years ago. Senescent cells lose the ability to divide. They increase in size. They change morphology and metabolism. Often, they become resistant to apoptosis. Sometimes, they сan release substances that promote the aging of surrounding cells. The causes of cell aging are often hidden in the action of harmful factors, or the accumulation of accidental damage. Currently, arrays of information about cellular aging are growing. And such data are becoming increasingly in practical use. The role and importance of senescent cells in the body is becoming increasingly clear. Their contribution to the development of the aging process of the body in general is becoming clear. The prospects for the study of cellular aging are growing.

It is possible to receive preparations of senescent cells by various methods. Ultraviolet radiation, exposure to powerful mitogens, DNA-toxic agents - cause quickly the transition of cells to senescent state.  But the most natural, most adequate mechanism is the natural aging of cells through a large number of divisions - replicative aging of the culture. To do this, the primary cell culture from volunteer donors is cultured for a long time. Investigating such cultures, we can observe the gradual development of fundamental changes that translate cells into senescent state. We get exactly the native natural material. This model can be considered the most similar and close to the natural aging processes. So, that model is the most relevant and adequate. The obtained senescent cell lines are then used for a range of promising studies:

2) Examination of senescent cells using a Raman microscope. Very promising high-tech direction. Thanks to the application of this approach, it is possible to find out many new features of senile cells.

3) Study of senescent cell metabolism and the effect of certain substances on it. Senescent cells with their low functionality often have increased resistance to certain factors.

4) Study of the expression of molecular markers of cellular aging. Such experiments are especially interesting at "long distances", when it is possible to estimate the gradual change of expression profiles in the cell population over time.

5) Development of methods for differential staining of senescent cells for further effective detection in tissues, and evaluation of quantity and quality in drugs.

Senescent cell models have many promising research and practical applications. And the basis of their creation is always a long, painstaking, and costly cultivation process. Our laboratory is paving this difficult way.