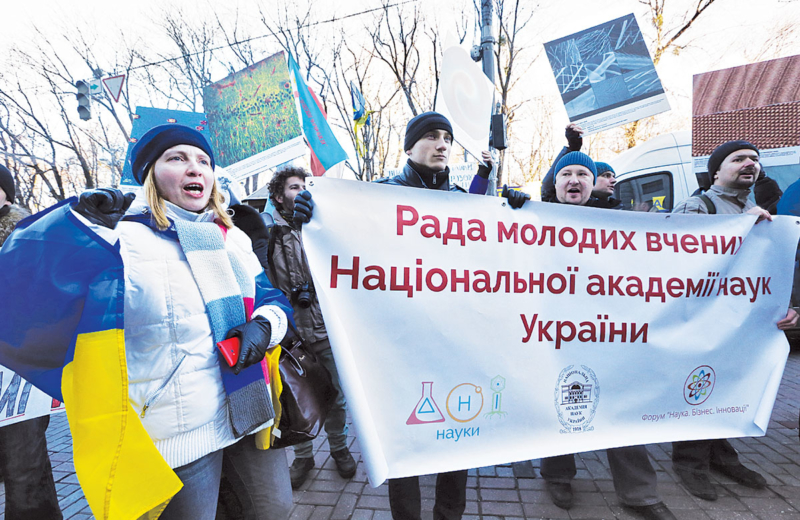 Young scientists from the National Academy of Sciences rally near the Cabinet of Ministers on Dec. 8, 2015, in Kyiv demanding better funding for Ukraine’s science. (Photo by Kostyantyn Chernichkin)

Borys Paton, the president of the Ukrainian National Academy of Sciences, who has been in office since 1962, will turn 100 this year.

The average age of an academy member is 70.

Meanwhile, the country is seeing an exodus of its brightest young minds to Germany, China and the United States. Less than 1 percent of the scientists who leave ever return.

Viktoria Shulga is a rare exception — she returned to Ukraine in 2005, after doing groundbreaking research at the University of Rochester, NY. She had hoped to continue her lab work at home, but Ukraine lacked the facilities she needed. Unable to continue her research, she founded the Ukrainian Science Club, a nongovernmental organization which advises the government on science legislation and reform.

But despite their efforts, and those of other reform-focused organizations, things are only getting worse.

According to government statistics, from 2014–2017, the number of employees in scientific organizations dropped by 30 percent, and Ukraine’s spending on research relative to gross domestic product fell by four times.

The problem is largely caused by a lack of incentives. For a young person in Ukraine, a Ph.D. in the sciences just isn’t worth the effort — the typical stipend for a Ph.D. student is approximately $40–50 a month, and after finishing their studies, a Ukrainian scientist can expect to earn slightly less than Kyiv’s $300 average monthly wage. 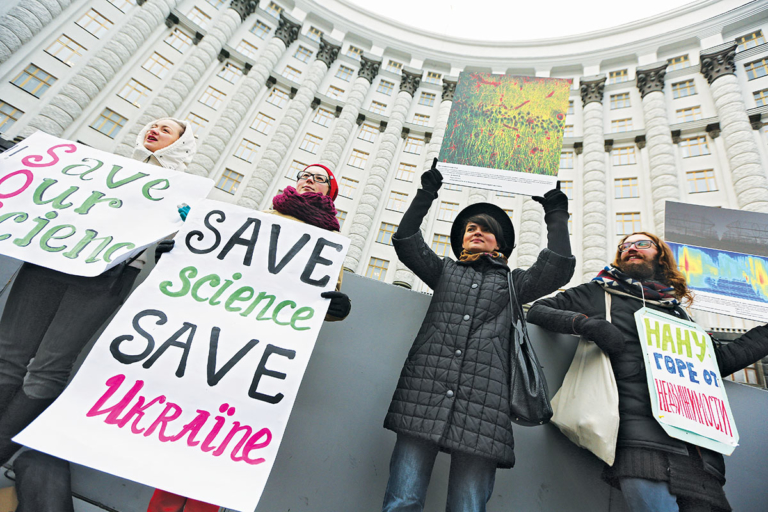 Outside of Ukraine, a qualified researcher can earn as much as $200,000 annually.

In post-Soviet Ukraine, the government can’t forbid workers with critical skills from going abroad, but there are other tools at the government’s disposal that could incentivize scientists to stay.

However, it isn’t using them.

“It’s one thing to have a good law, and another to finance implementation,” Shulga said.

Funding new scientific initiatives is the responsibility of the National Council on Science and Technology, which has two committees — a science committee and administrative committee.

The function of the science committee is to develop programs and advise the government, while the administrative committee’s function is to secure funding.

This division of labor was intended to streamline the funding process.

For example, the State Key Laboratory program, founded in 2011, funded research in Molecular and Cell Biology. The program produced a variety of widely cited publications, including a review in “Nature Reviews Cancer” which was cited over 360 times by journals worldwide. But despite the program both advancing science and bringing recognition to Ukrainian researchers, the government pulled funding after a year.

Without government support, Ukrainian science is becoming largely a diaspora phenomenon. Unlike in other countries, there is a total lack of the brain circulation of scientists — where scientists are encouraged to do research abroad, but then return home with new expertise. For brains to circulate, there needs to be at least a minimal level of infrastructure, and in Ukraine that just isn’t present.

“The problem is not talent — talent is everywhere,” said Nikita Lukianets, a Kyiv-born entrepreneur and neuroscientist currently based in France.

Some, however, are wary of the government taking too active a role.

According to the Odesa-based blogger and political analyst Nikolai Holmov, greater state involvement in science and IT could make the situation even worse if it were to result in state/oligarchical capture of what should be dynamic sectors of the economy.

Ukrainian scientists take comfort in the fact that it is not a zero-sum game. Science is an international phenomenon, and so are the achievements of Ukrainian scientists. The work Ukrainians do in other countries can still help the country boost its reputation for producing high-quality research and researchers.

“It’s all about having an international mindset,” said Lukianets.

But while it is true that science benefits the global community, the benefits are not evenly distributed. Countries where discoveries are initially made typically reap the biggest benefits, and so robust science and research is key to economic development. Those countries that are able to invest significantly in smart, pro-innovation policies attract more talent. If Ukraine isn’t able to do this, it will be left behind.

“The government does not realize that we are losing time,” Shulga said.