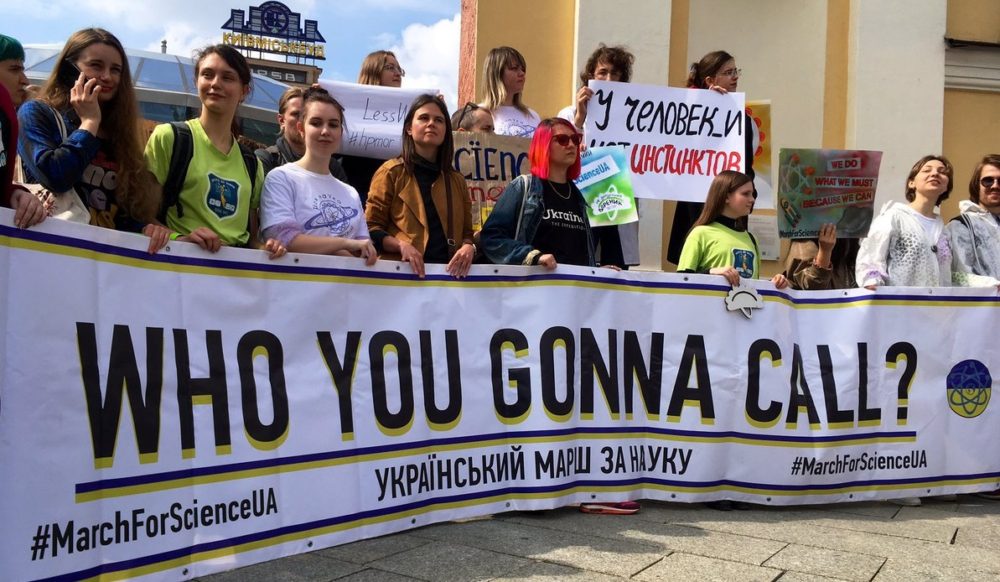 Some two hundred members of Kyiv's science community and activists came out this Saturday for the March for Science - part of a global movement to celebrate the importance of science in our lives.

The participants gathered in Shevchenko Park and walked to Independence Square, where they were to release a large inflatable varenyk - "the sole symbol of national pride of an anti-utopian Ukraine of the future that didn't take science seriously." Unfortunately, there wasn't enough helium to raise the varenyk into the sky, an appropriate commentary on the level of state spending on science in Ukraine.

As the brain drain continues, Ukraine's science community has been urging the government for reform. Concerns have also been raised about the government's inaction to the spread of pseudoscience and plagiarism, with several high ranking officials recently caught up in scandals over plagiarized dissertations.

This call for change and support was the key message of today's event, where it was stressed that the destruction of science in Ukraine poses a threat to the country's economy, image and national security.

Some marchers came dressed in costumes and carried signs saying "Countries that don't invest in science become sources of raw materials for those that do", "Stop the brain drain!", "Ukraine needs science the way it needs water!".

Acting Health Minister Ulana Suprun joined the marchers said that as part of their reform her ministry will move from funding institutes that supposedly "do some kind of science" to providing support to specific projects that are beneficial in the global and Ukrainian environment. She also underscored the importance of Ukrainians participating in international conferences and becoming part of the international science community.

One positive step is the recent creation of the National Research Fund, which will provide competitive funding for research. The newly launched institution recently announced a call for international experts to join their pool of independent referees and is expected to start fully functioning this fall.

What will Ukraine be known for in the future, the organizers ask: a lunar station or just varenyky? "We came out here to remind everyone that Ukraine isn't a banana republic, that we have smart people and a world-class school of science. We need science reform."

The inaugural March for Science was held in Washington, DC, on April 22, 2017.

Watch video and photos from the March.

Shevchenko Park, located across the street from Taras Shevchenko University, is one of Kyiv's most picturesque parks. It was known as University Square when it opened in 1860. A statue to Emperor Nicholas I was erected in 1896 and subsequently demolished by the Bolsheviks in 1920. The current statue to Taras Shevchenko was unveiled in 1939 to mark the 125th anniversary of the birth of Ukraine's poet laureate. Over the years it was the site of many historical rallies. Today it is a favorite spot for locals to relax and bring their children, and for chess enthusiasts to play and socialize.