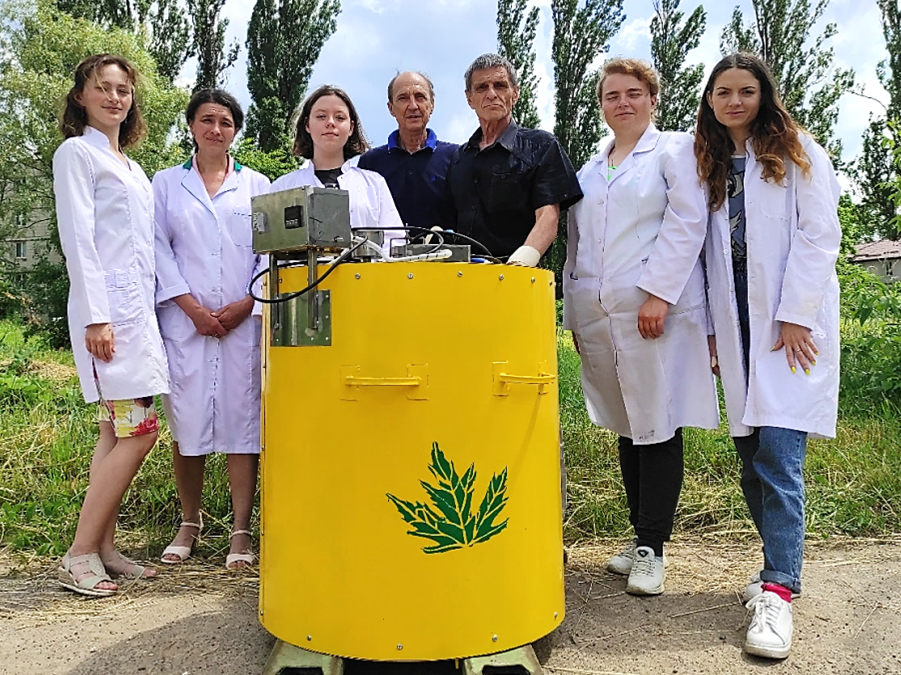 Environment pollution by man-made organic waste is one of the most urgent problems nowadays. Solid and liquid organic waste produced in megacities and suburban areas is the greatest threat.

Despite some achievements in the direction of their degradation and bioremediation, the number of landfills is constantly growing all over the world.

Biodegradable organic waste of plant and animal origin (food, etc.) and toxic leachate are the most hazardous. Concentrated organic polymers of natural origin (vegetables, fruits, meat and other food waste) are very quickly degraded by microorganisms with the formation of also concentrated toxic compounds such as fatty acids (acetic, propionic, etc.), alcohols (methanol, ethanol, etc.) and gases (hydrogen sulfide, ammonia, etc.). That is why the environment suffers from multilevel pollution with a wide range of toxic gaseous and liquid compounds (Fig. 1, a). 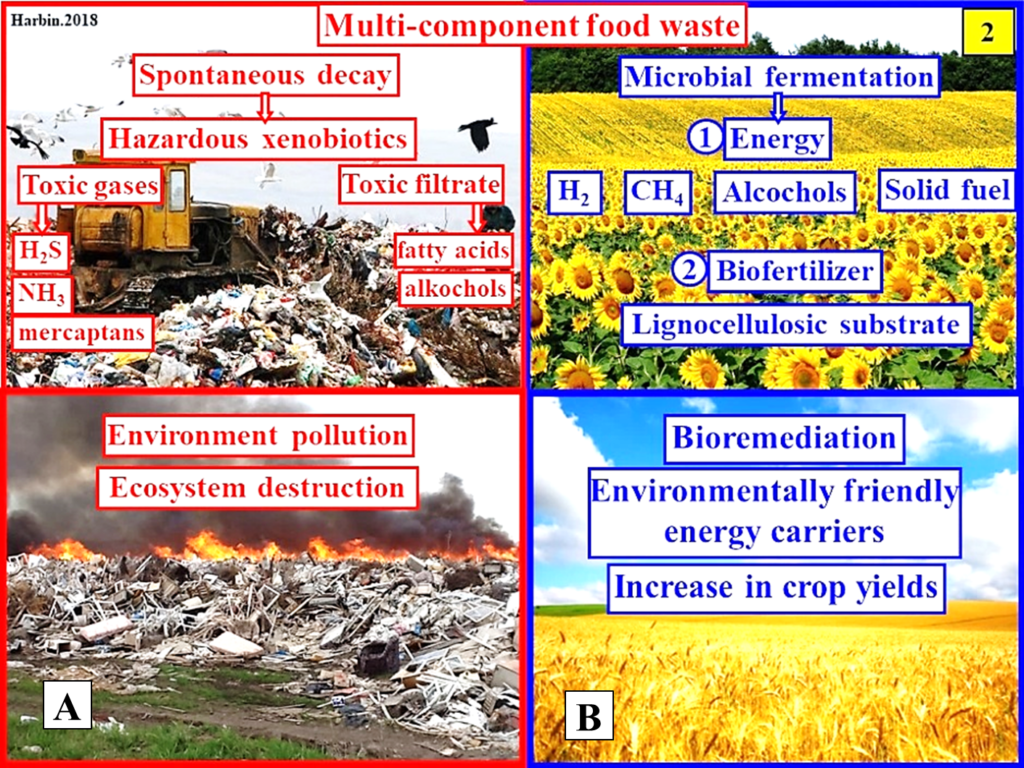 Fig. 1. Negative consequences of environment pollution (A) and the prospects for the implementation of bioremediation biotechnologies (B)

Toxic solid and liquid organic waste is a problem not only in landfills, but also in megacities, namely in suburban areas represented by cottage buildings. In most cases, cottage towns have no centralized sewers and municipal services for the removal of solid waste, including food. Widely advertised industrial "bioseptics" are ineffective. Their use involves a discharge of poorly purified water into the environment.

That is why the development of novel universal biotechnologies for fast and efficient treatment of solid and liquid organic waste is a relevant area for the whole world.

Applying the method of thermodynamic prognosis, we have developed a theoretical model of optimal pathways for degradation of solid and liquid organic waste by microbial communities. Anaerobic hydrolysis of organic compounds with the synthesis of hydrogen was established to occur the most efficiently under neutral conditions and low redox potential, ie at pH = 7.0 and Eh = - 414 mV (Fig. 2). In our opinion, the development and implementation of such an approach will save the environment and obtain a number of useful products (Fig. 1, b) 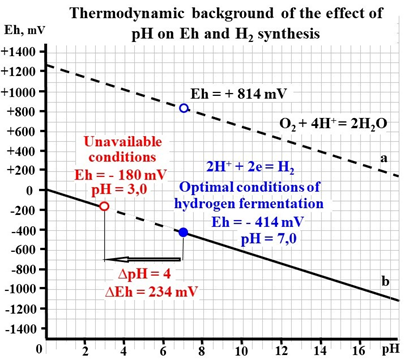 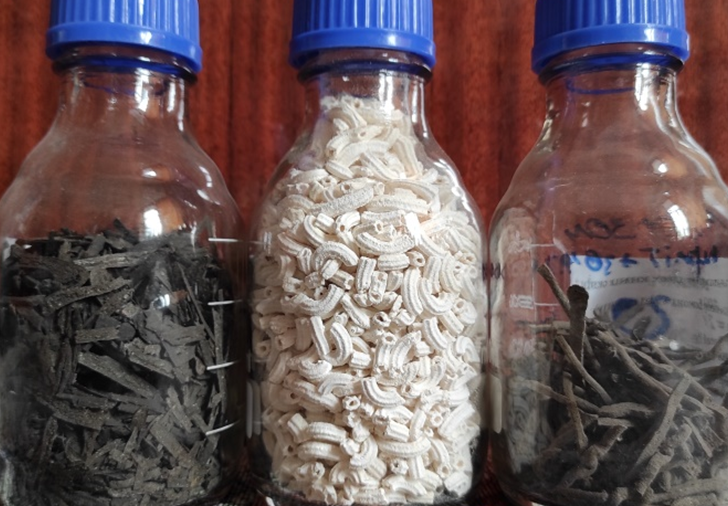 Fig. 3. Modifications of granular microbial preparation for the degradation of solid and liquid organic waste and the production of useful products: energy (H2 or CH4), biofertilizers and pure water

Previously, we developed and tested a special horizontal Bioreactor-1 for the degradation of concentrated solid food waste using GMP (Fig. 4). 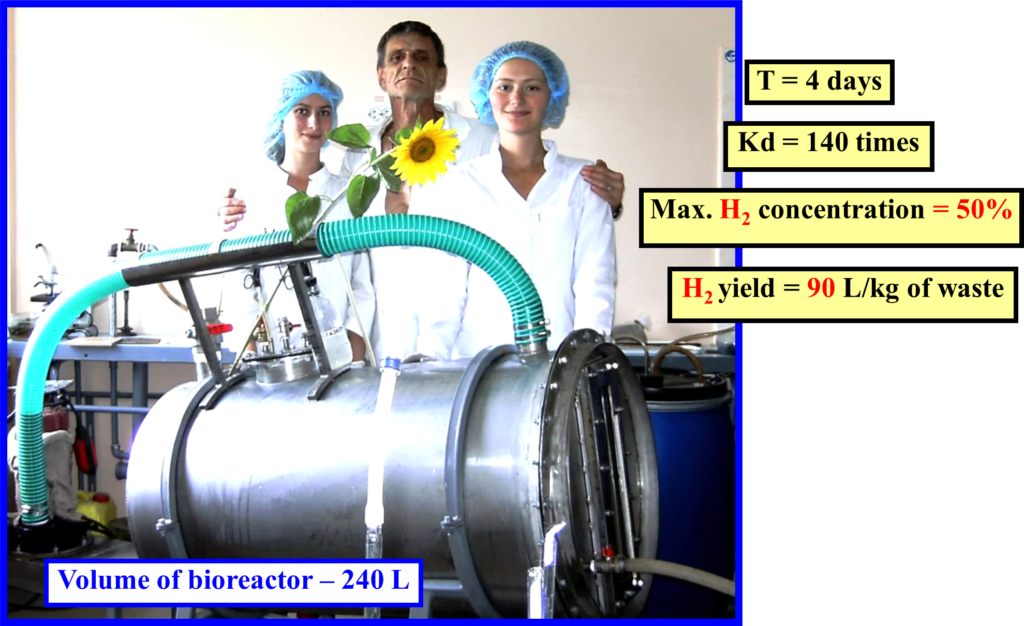 Modern experimental and industrial biogas plants provide the duration of fermentation (T) about 30 days, the coefficient of waste degradation (multiplicity of waste reduction, Kd) equal 5-10, and the yield of hydrogen in the range of 30-40 L. Application of our Bioreactor-1 several times improved these indicators. Thus, T was only 4 days, Kd was 14 times higher, and hydrogen yield was increased by at least twice.

However, during the degradation of multicomponent solid waste, an acidic filtrate is formed, in which low molecular fatty acids and alcohols are present in high concentrations. The concentrated filtrate is extremely toxic to all parts of the food chain in the environment. In addition, it almost completely inhibits the further degradation of natural organic polymers in landfills.

That is why such solid waste in landfills rots very slowly, for decades. Peat bog mummies illustrate the inhibitory properties of fatty acids and alcohols (Fig. 5).

According to its properties, the water of such swamps is a complete analogue of toxic filtrate. The storage of mummies in peat bogs for centuries is the evidence of the toxicity of fatty acids and alcohols.

Therefore, the development of novel biotechnologies for the purification of the filtrate from toxic components that inhibit the growth of microorganisms and poison the environment is an urgent task.

We have developed Bioreactor-2, which allows to effectively purify the toxic filtrate in both aerobic and anaerobic conditions (Fig. 6).

Within 3 weeks, the microorganisms of GMP modifications adapted to the filtrate and started degrading the organic compounds of the filtrate. In general, during 3.8 months (115 days) the concentration of organic compounds decreased from 1071 mg/L (of total Carbon) to 106 mg/L via anaerobic methanogenic fermentation, and to 56 mg/L via aerobic oxidation. Therefore, the efficiency of aerobic purification was 1.9 times higher than anaerobic. However, 1 L of methane was obtained from each liter of filtrate by anaerobic fermentation.

In general, the results are very promising. Thus, liquid organic waste filtrate, which slowly decomposes for decades in the collectors and in the body of landfills, microorganisms of both modifications degraded during only 4 months and 10-20-fold reduced the content of fatty acids and alcohols. The content of organic compounds in the concentration range of 56-106 mg/L is environmentally friendly, and in the future such purified filtrate can be used for irrigation without harming the environment.

Thus, we have developed the approach providing the solution of the problems of environmental protection, energy production (H2 or CH4) and water purification. It provides for the degradation of multicomponent solid food waste to obtain energy (hydrogen or methane) as well as the purification of toxic filtrate from fatty acids and alcohols to obtain pure water and methane.

However, another important problem remains to be unresolved i.e. how to combine these two separate biotechnologies into a universal one.

This is especially true for the disposal of organic waste generated in cottage locations. Thus, solid culinary waste (raw and cooked) as well as liquid (water after washing dishes, fecal runoff, etc.) are accumulated. It is obvious that the implementation of two separate biotechnologies of solid and liquid waste treatment at a cottage site is unacceptable. The only suitable solution is the implementation of a universal biotechnology providing the degradation of  solid and liquid waste in one bioreactor. In addition, such a biotechnology and the bioreactor itself should be very easy to operate and accessible to everyone.

To create such a universal biotechnology we received the support of the U.S.-Ukraine Foundation Biotech Initiative.

We have developed a universal GMP-Bioreactor for the treatment of solid and liquid organic waste (Fig. 7). The bioreactor was installed and tested at a cottage site in Lebedyn village, Boryspil district, Kyiv region.

GMP-Bioreactor is a plastic container with a capacity of 300 L. It contains a mixing pump, a heat exchanger for heating the culture fluid and a thermocouple to control and maintain a stable temperature. Control and regulation of temperature and mass transfer is carried out by the electronic control unit outside the bioreactor. Thermal insulation is achieved due to a layer of basalt fabric located between the body of the plastic container and the outer protective steel cylinder. Waste and GMP are loaded into the bioreactor through the lid located on the top of the bioreactor. 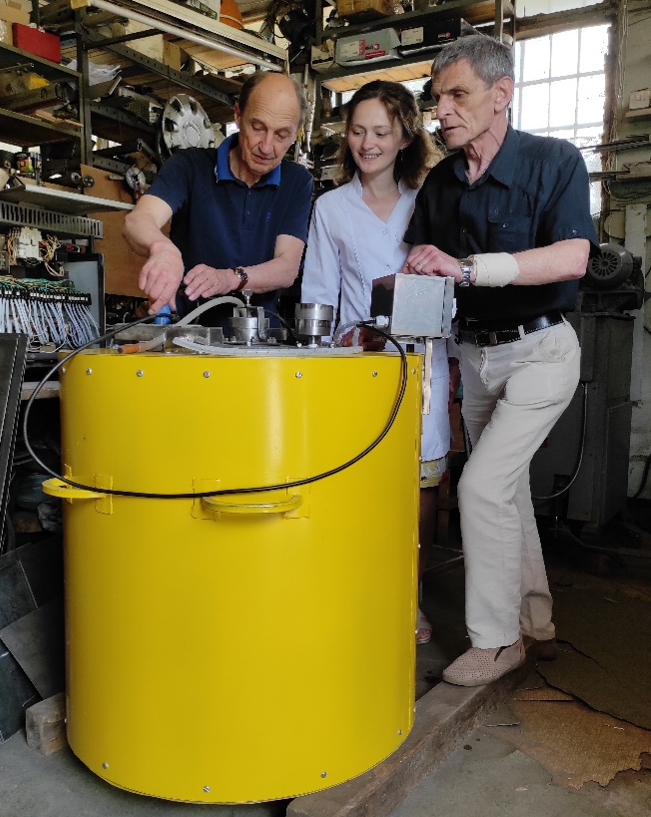 The main distinguishing feature of the GMP-Bioreactor is the pulsation mode of the technological cycle  i.e. cyclic change of anaerobic and aerobic conditions in the bioreactor (Fig. 8). 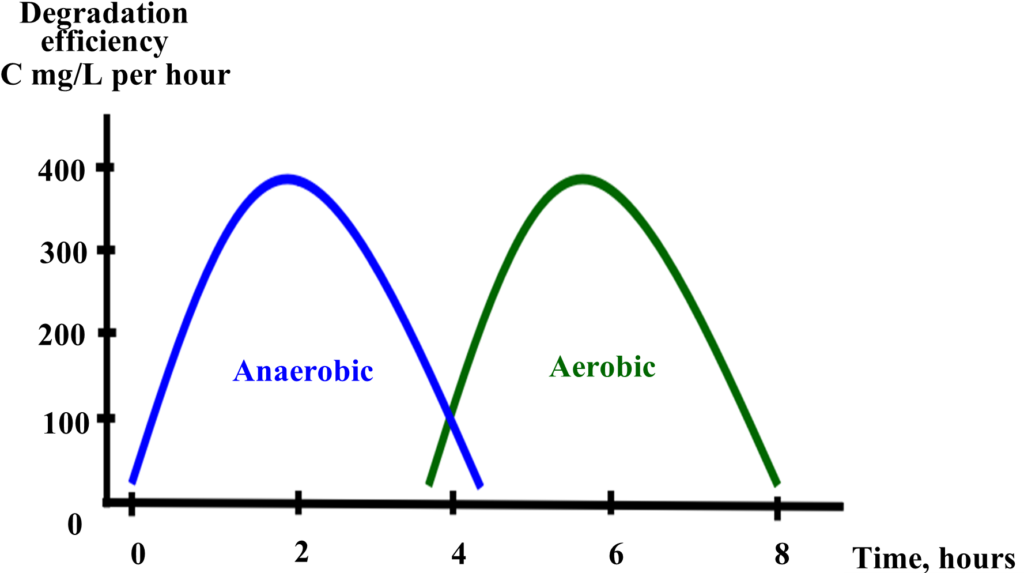 Fig. 8. Pulsation mode of the degradation of organic compounds in GMP-Bioreactor: cyclic change of anaerobic and aerobic cultivation conditions

The pulsation mode of change of anaerobic and aerobic conditions is provided by the mass exchange of liquid inside the bioreactor (Fig. 8). In the absence of mixing, aerobic and facultative anaerobic bacteria create conditions in the fluid suitable for the growth of obligate anaerobic bacteria. Such bacteria hydrolyze solid polymers (food waste of plant and animal origin) and produce toxic hydrolysis products (fatty acids and alcohols). For their degradation, it is necessary to switch the bioreactor to aerobic mode. It is achieved by the application of the pump located inside the bioreactor. The liquid is saturated with oxygen during mixing. Then aerobic microorganisms degrade fatty acids and alcohols. After the pump is switched off, anaerobic conditions are created in the liquid again and anaerobic hydrolysis of solid polymers begins again. Mass transfer mode (the duration of pause and mixing) is automatically supported by the electronic control unit.

Thus, due to this pulsation mode of the technological cycle, fast and efficient simultaneous degradation of solid and liquid organic compounds is achieved within 6-8 hours. Purified culture fluid can be drained into the environment or used for watering vegetables after reducing the concentration of soluble compounds to 50-100 mg/L.

The GMP-Bioreactor was pre-tested in the Department of Extremophilic Microorganisms’ Biology of the Zabolotny Institute of Microbiology and Virology of the NASU (Fig. 9, 10, 11). 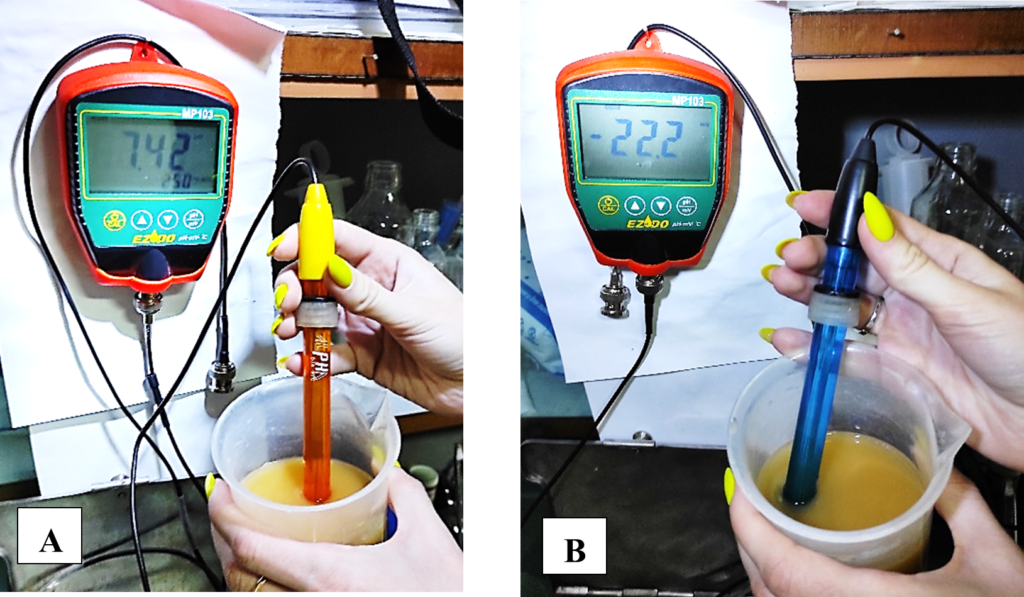 Fig. 10. The measurement of pH (A) and redox potential (B) in GMP-Bioreactor

The GMP-Bioreactor was transported to the cottage site in Lebedyn village after testing at the Institute.

The GMP-Bioreactor is installed under a canopy near a residential building (Fig. 11). At present, our biotechnologists optimize the fermentation regime directly on the cottage territory, namely measure pH, redox potential, content of soluble organic compounds and improve the mass transfer regime in order to increase the efficiency of the degradation of solid and soluble organic compounds.

In the future, our biotechnologists will teach the family living in the cottage to effectively use the GMP-Bioreactor for waste treatment (Fig. 12). 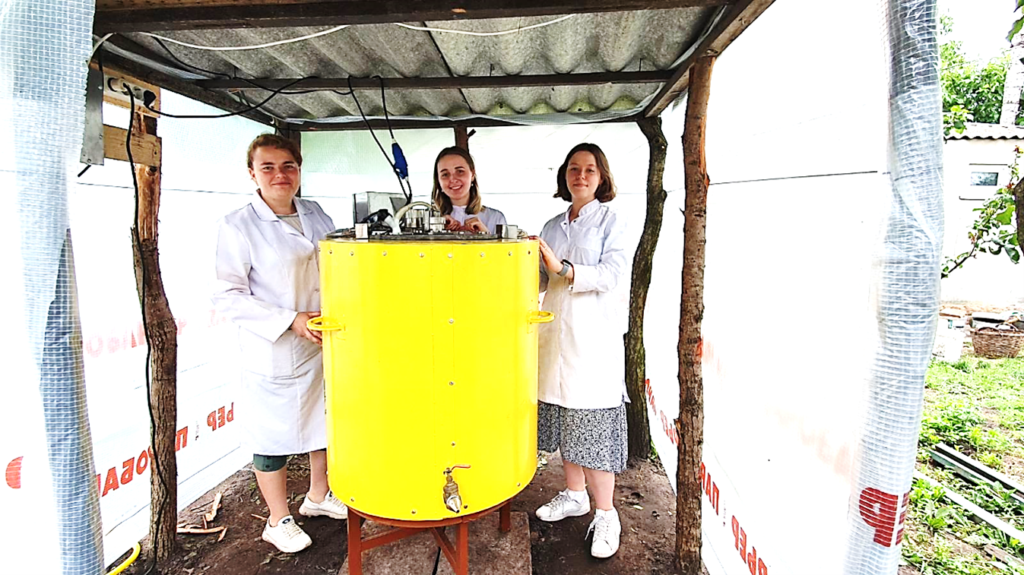 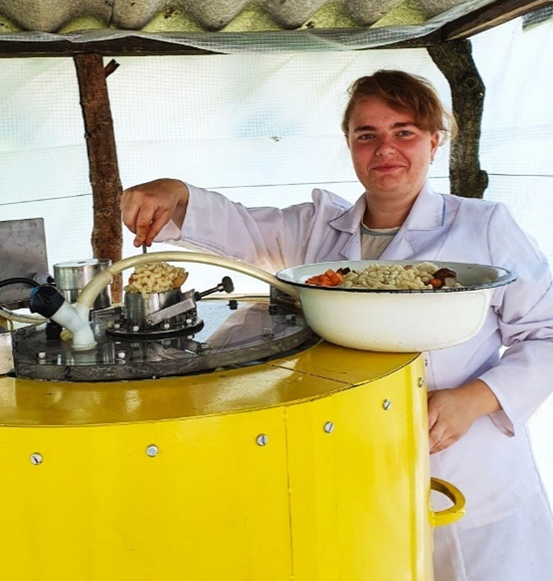 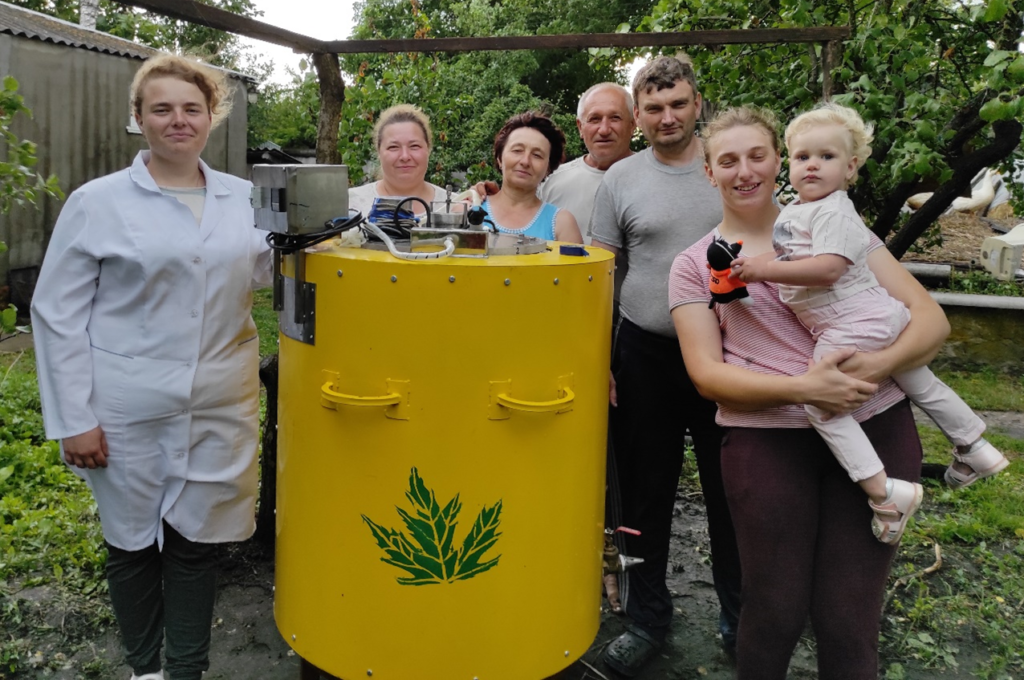 Fig. 13. Biotechnologists and the family of the cottage 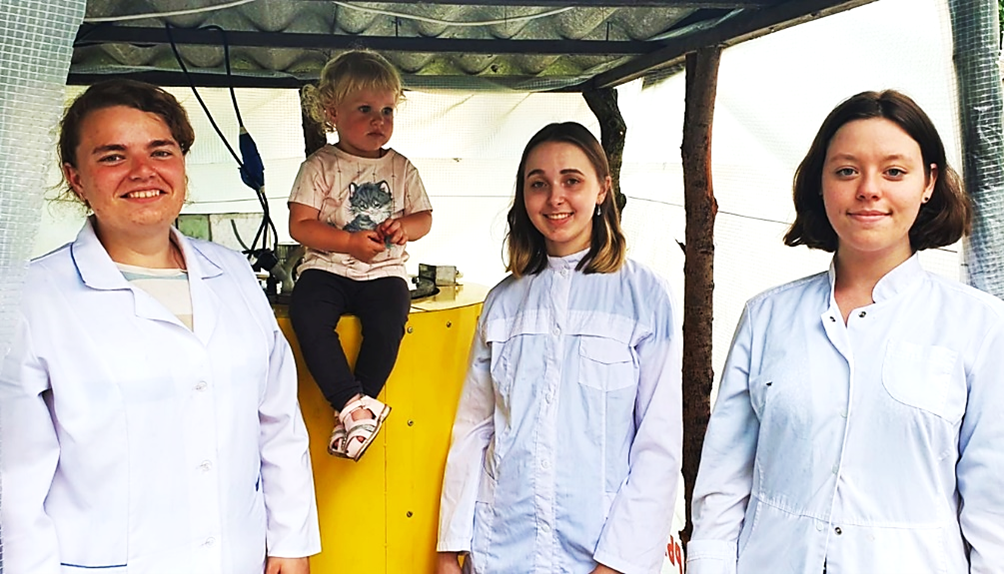 Fig. 14. The team of biotechnologists and the young generation

We will not stop there. We have already started to scale the bioreactor, to increase its working volume from 300 to 1000 L (Fig. 15). We hope that further improvement of our biotechnology will lead to its large-scale industrial implementation. 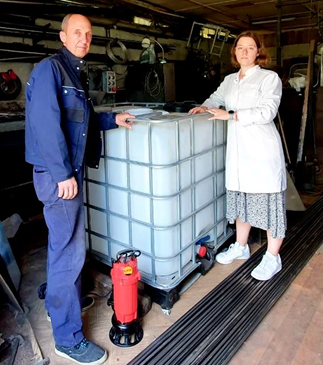 Fig. 15. Technical designer Mykhailo Butenko and biotechnologist Oleksandra Shabliy near the 1000-L container from which the new bioreactor will be made